A university in Japan organized virtual graduation ceremony with robots

At a time of the coronavirus epidemic, a virtual graduation ceremony was held at a university in Japan. Graduates attended the ceremony through robots due to the epidemic, and interesting images appeared.

Business Breakthrough University (BBT), located in the capital city of Tokyo, held a virtual ceremony instead of the traditional graduation ceremony due to the coronavirus, which affects life negatively and causes schools to close in Japan, as in the rest of the world.

A group of primary school students previously held a virtual graduation ceremony through Minecraft. Students at the University of Pennsylvania inspired by this ceremony have rebuilt all their campuses in Minecraft, with plans to keep graduation and other activities online.

While virtual meetings are becoming more common, BBT University has taken a new approach using remote control robots to make the ceremony more physical. Mobile robots called "Newme" with tablets on them were connected to the students via graduation outfit and video conferencing application Zoom. 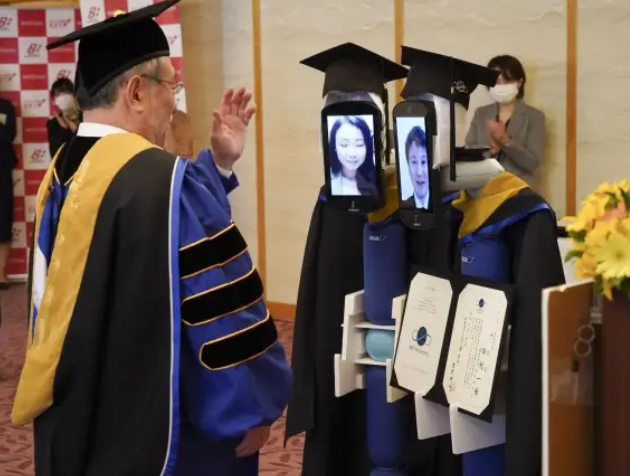 Graduates watched the ceremony through Zoom. The robots were controlled by a small number of graduates who attended the ceremony. When the name of the graduate students was called, the robots came in front of the university head, Omae Kenichi. The graduates, whose faces appear on the tablet screen, thus received a diploma. In this way, it was prevented that many people came together in the same hall at a time when the coronavirus epidemic was experienced.

Although the robots replace the graduate students, the university president made his traditional speech. Professor Shugo Yanaka, Global Business Dean, planning the virtual ceremony, hoped that BBT's ceremony would help other organizations working to organize events.