Download › News › Delivering samples from Mars to the Earth: Mars 2020!

Delivering samples from Mars to the Earth: Mars 2020!

NASA will send the largest rover in the history of its exploration to the Red Planet in two years. As part of the mission Mars 2020, the agency is to focus primarily on searching for traces of life and collecting samples for research on Earth.

The rover will be a kind of laboratory on wheels. It is designed and built in such a way that it can collect up to 37 samples. However, its primary mission will be to collect 20 fragments of land within 1.5 Martian years. The samples are going to be packed in containers and will be waiting for the next mission, whose task will bring them to Earth as part of the Mars Sample Return mission. Sounds amazing.

The project of its preparation involves Poles and Germans. Their role is to build a special robotic arm, which will be equipped with a lander. Thanks to it, previously collected samples of Martian soil will be transferred and placed in an airtight container. It is in it that they will eventually reach Earth. It must be emphasized here that this will be the first mission in the history of mankind in which soil samples from an alien planet will be delivered to Earth.

The device will land in a geologically interesting area for astrobiologists in the area of ​​the planet, on which rivers and lakes of liquid water could once be found, and biological life in them. It will be a delta region in the Jezero crater, which is located on the edge of Isidis Planitia, a gigantic basin located north of the equator of the planet. Scientists chose this area because of the oldest and most interesting geological form of the Red Planet occurring there. They were discovered there by Martian orbiters, clay minerals. They suggest the presence of a water environment, and the thickness of the sediments may be up to one kilometer.

"The Jezero Crater offers us a place with rich geology, with landforms dating back up to 3.6 billion years, which can answer important questions about the evolution of planets and astrobiology. Getting samples from this unique region can revolutionize our knowledge of Mars and its ability to sustain life there." said Thomas Zurbuchen - NASA Science Mission Manager. 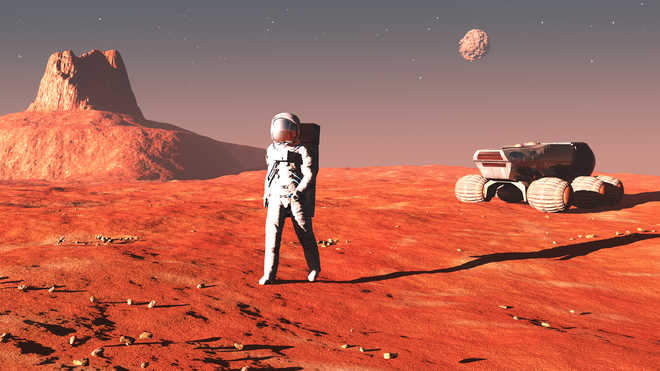 Before billions of years, when Mars was not a barren desert, and its climatic conditions could resemble earth, the delta of the ancient river could bear and store microorganisms there. If we really want to finally discover them, it will be the best place to do so. The task of the Mars 2020 rover will be to collect aluminum samples and carbonates from the ground and examine them, and then a mission is planned to deliver them to Earth for more detailed analysis.

Engineers from the Mars Program Formulation Office at JPL have developed a special Mars Ascent Vehicle (MAV) project that would receive samples taken by the rover, and then he would take them to orbit, from where they will be picked up by a solar-powered orbiter. From there, samples would go directly to Earth, or close to the Moon, where they would be picked up by Orion. However, the biggest problem will be to provide them safely to Earth laboratories so that they do not contaminate the biosphere.

As the Red Planet is in class V of the planetary conservation principles, there is a huge risk related to the fact that the samples will find extraterrestrial self-replicating organisms, so the samples must remain strictly closed until a procedure for their effective sterilization has been developed. The researchers point out that soon they will have appropriate techniques and procedures that allow them to do it in a safe manner.

Choosing the right research station for the Mars 2020 mission was not an easy process. Astrobiologists have been thinking about it for over 5 years, analyzing thousands of photographs of the surface of the planet, among others based on images obtained by space probes, orbiting around Mars. The start of the probe is planned for July 2020, and landing in February 2021.

This is an incredible project, and we all will see its result for our next generation. Obviously it is a very difficult process to get there, and later deliver samples to the earth. Hopefully it will be done successfully and we will share the good news with you here.

This Commodore 64 is still being used in Poland!